What have we been up to lately?

To see a visual record of what we have been getting up to recently follow us on Flickr  ​https://www.flickr.com/groups/2904633@N24/
Herb Garden July 2020
The Friends of Kett's Heights practical group have been working for some time now planting a herb garden behind the upper meadow. We've just finished repairs to the enclosing wall and the building of a brick seat where people can go to relax and enjoy the garden.  Many thanks to our 'builder', David Howarth and herb garden workers Jane & Kath. 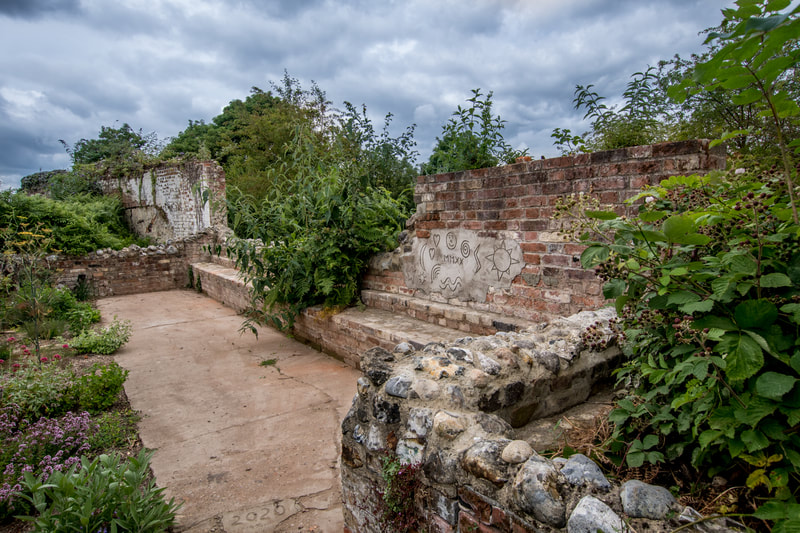 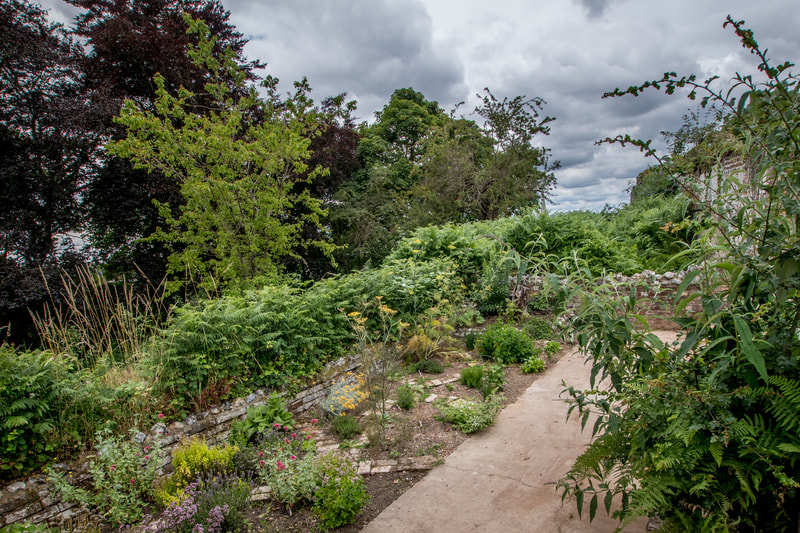 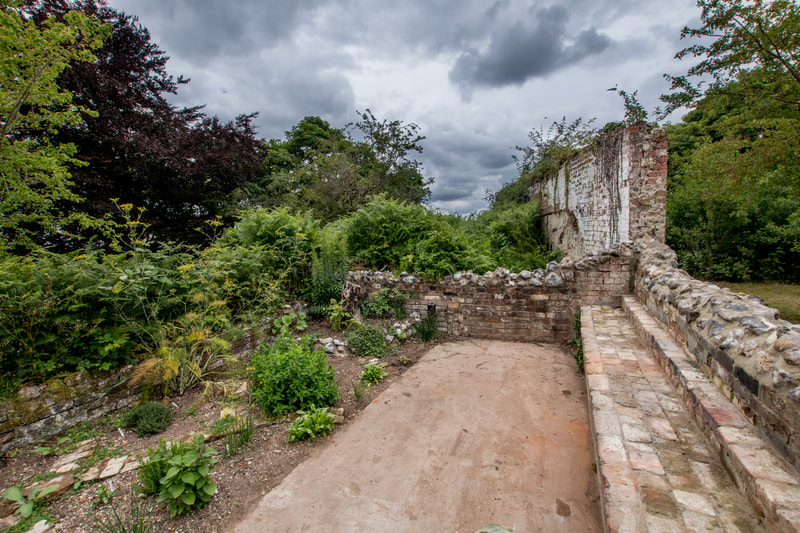 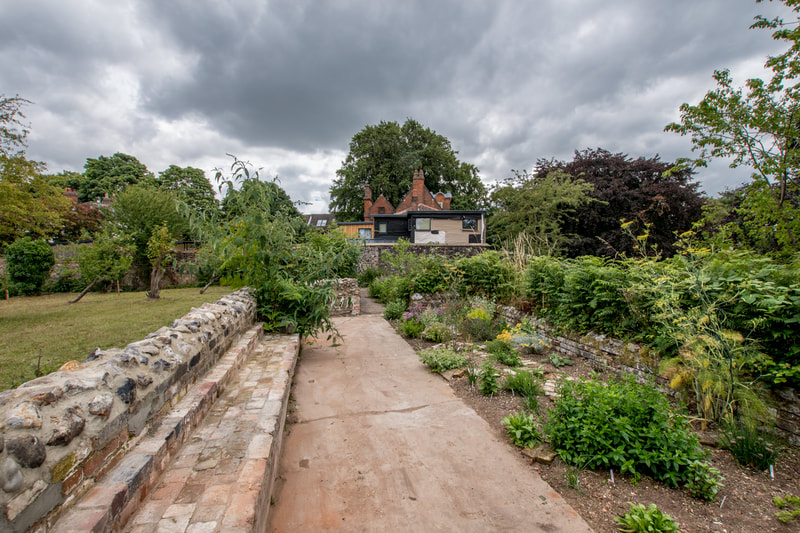 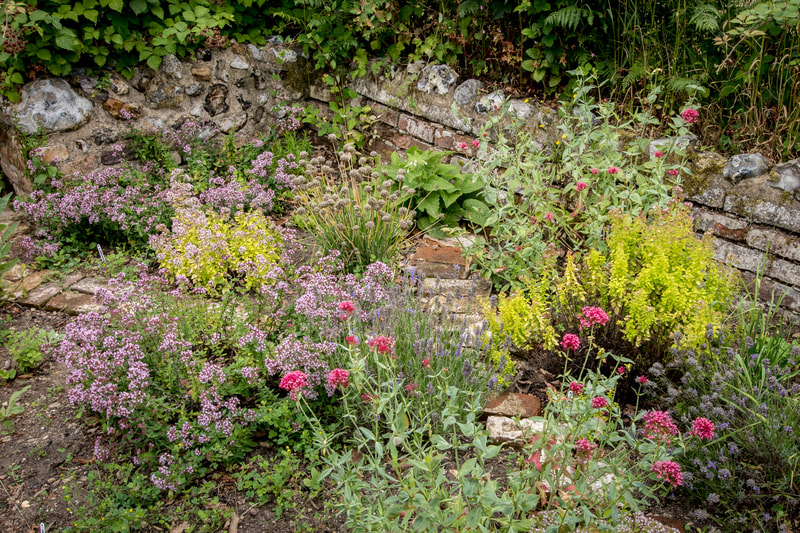 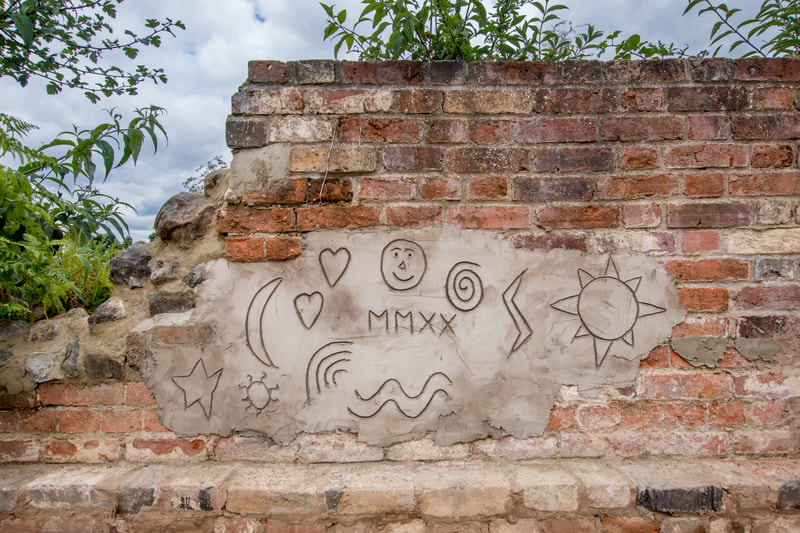 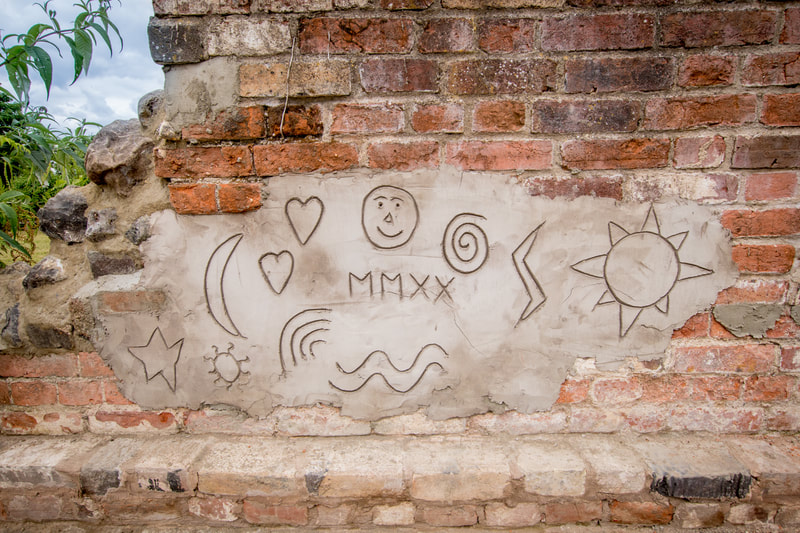 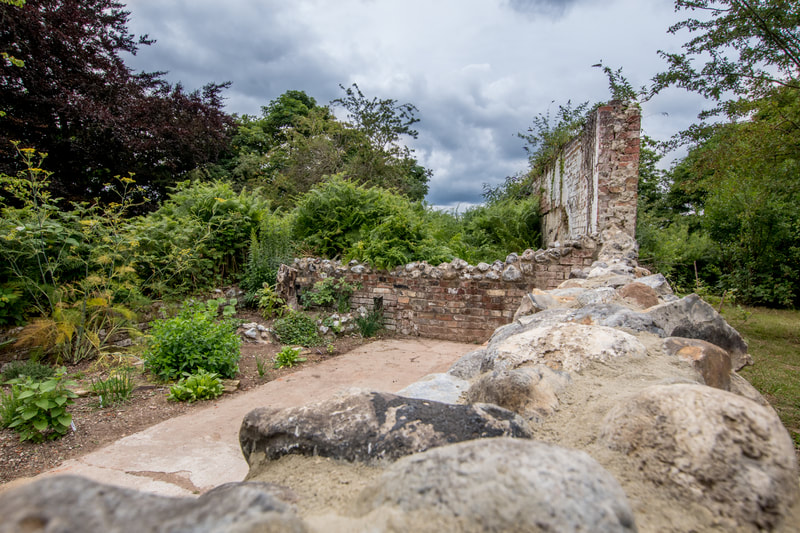 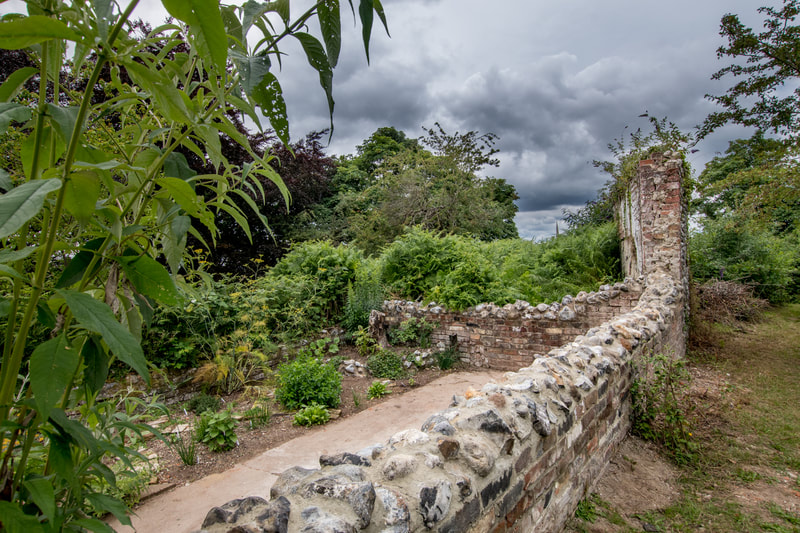 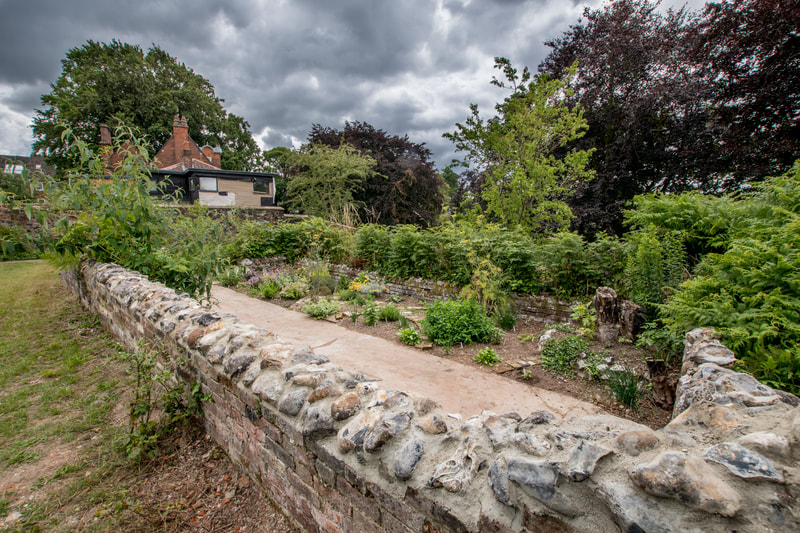 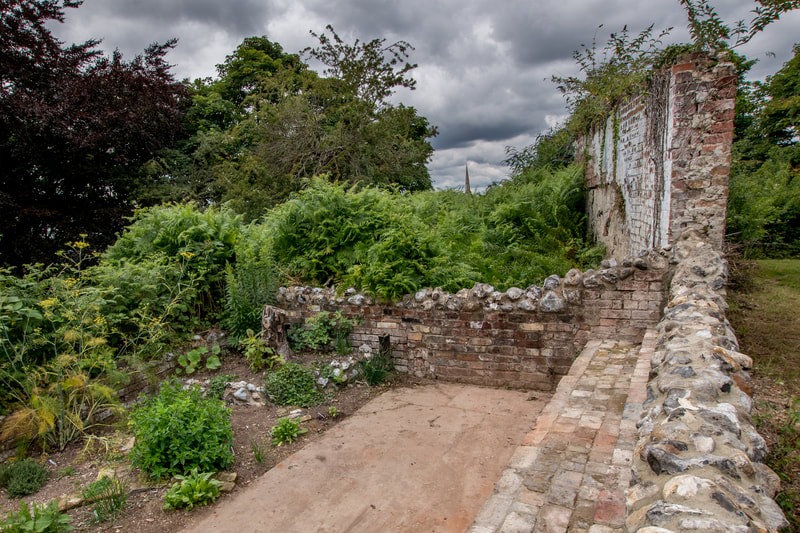 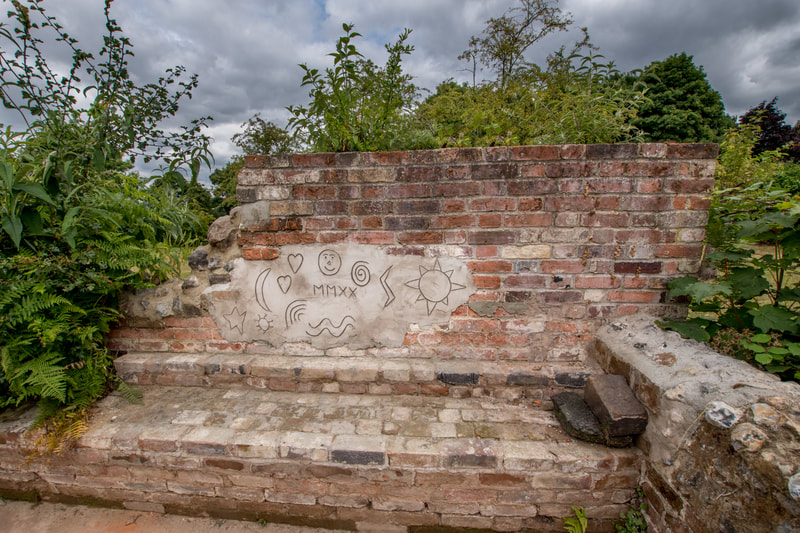 Successful grant bid
As many residents will be aware the gas holders on Gas Hill  have been undergoing demolition over the past year. That work is nearing completion but from the outset National Grid made it clear that they wanted to work with the community to minimise disruption and provide reassurances regarding safety. As a community based group we learned that National Grid also made grants available in areas where their work took place and we were encouraged to apply. This seemed like a good opportunity, and we put together a bid for £5000 to cover the cost of tree work at Kett’s Heights. This work will focus on trees that are causing structural damage to the Victorian terrace walls at many points across the site. In addition we have also identified a small number of trees that are reducing the panoramic visibility at the view-point. The majority of trees that are to be cut down are Sycamore and dead or dying Elm.

​Monthly tours
Our final tour of the year was a complete wash-out. So far, no tour had been rained off since we started in 2016 so it had to happen one day. Paddy, Mike and Vanessa dutifully turned up at 2.30 in case any foolhardy folk wanted to experience Kett’s Heights in the rain but, thankfully, no-one did and we could scuttle home at 2.31.
​
Herb Garden
The herb garden within the walls of St  Michael’s Chapel/19th century greenhouses is looking really lovely thanks to Jane and Kath. David is also creating an attractive seat as a means of using up all the loose bricks that are lying around. Otherwise they tend to be used as missiles by energetic youths.​
​Repairing the panorama panel
Unfortunately, our panorama information panel was damaged by inappropriate use of loose bricks, but this has now been repaired and re-installed by Norman and David. 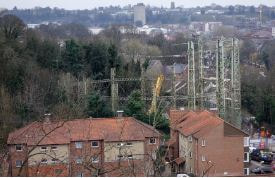 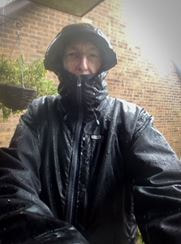 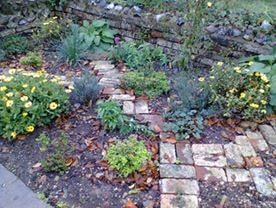 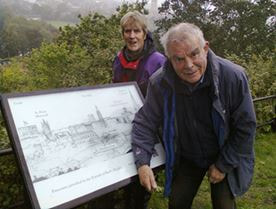 ​Thanks again to the Norwich Fringe Project who came and cleared some trees at the top of the entrance path to allow more light into that area. 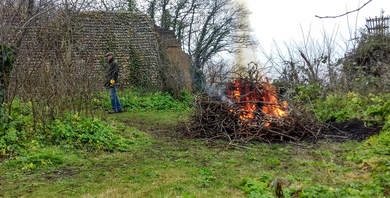 Practical Work - Wed. Feb. 21st
In association with NCC and their chain saw and brush cutter, we cleared the terrace between the two greens and cleared up the mess. A nice bonfire kept us warm on a chilly, miserable morning. Plans are afoot to plant about 20 new fruit trees next month!

Sunday 15th October saw various artists visit Kett's Heights as part of PAINT OUT NORWICH and paint the view from the beacon.   http://www.paintoutnorwich.org/
​Here's just a few of the results:- 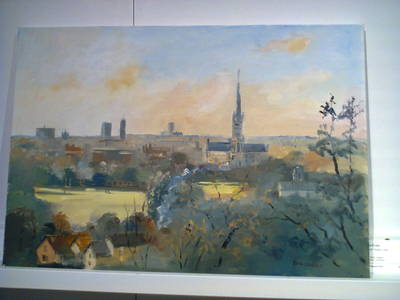 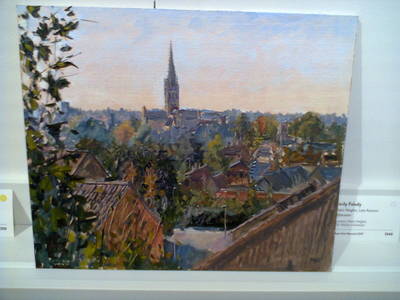 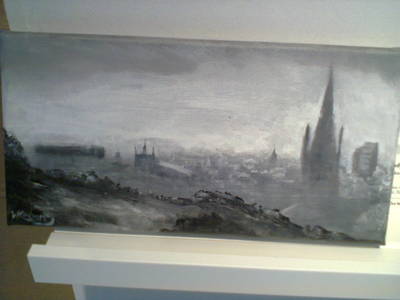 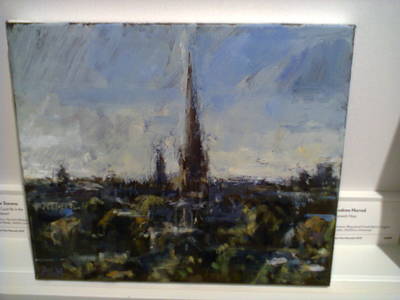 Sunday 8th October saw the start of our Winter Litter Patrol schedule. This means that from now until the end of March 2018 we only patrol for litter every other day instead of every day.  Generally, there is a lot less litter in the Winter months but it still accumulates.  Please remember to use the bins or take your rubbish home. If you exercise your dog on the Heights then please clear up after it.  Many thanks.
Wednesday 4th October​  saw us planting another 1500 snowdrops either side of the pathway leading up to the heights and 150 crocus bulbs under the apple tree on the lower green. Hopefully, we'll see some results next Spring! It'll be a few years before they look as good as the pictures below but we live in hope!
The last free guided tour of the 2017 season took place on Sunday October 1st and was well attended. No more free tours now until April 2018.

The Friends of Kett’s Heights ran tours on all the Heritage Open Days – 7th-10th Sept – and attracted over 145 people. Others came under their own steam and we were visited by another Flintspiration Church Run, so Kett’s Heights was very busy. Visitors really appreciated the work that the Friends have done and spent some time admiring the view and encouraging us to lower the tree canopy even further so they could see all the way round. This will require the Council to provide specialist tree surgeons but we are hopeful more work will be done. www.kettsheights.co.uk/gallery.html

Family trail
We created a Family Trail round Kett’s Heights for Heritage Open Days and this will shortly be available to download on the website.

Here's a link to a u-tube video of their opening song:-  https://youtu.be/DLS6EPrnr9M
There was an enthusiastic response to the Common Lot’s performance of Come Yew In on 1st July with over 400 people attending. 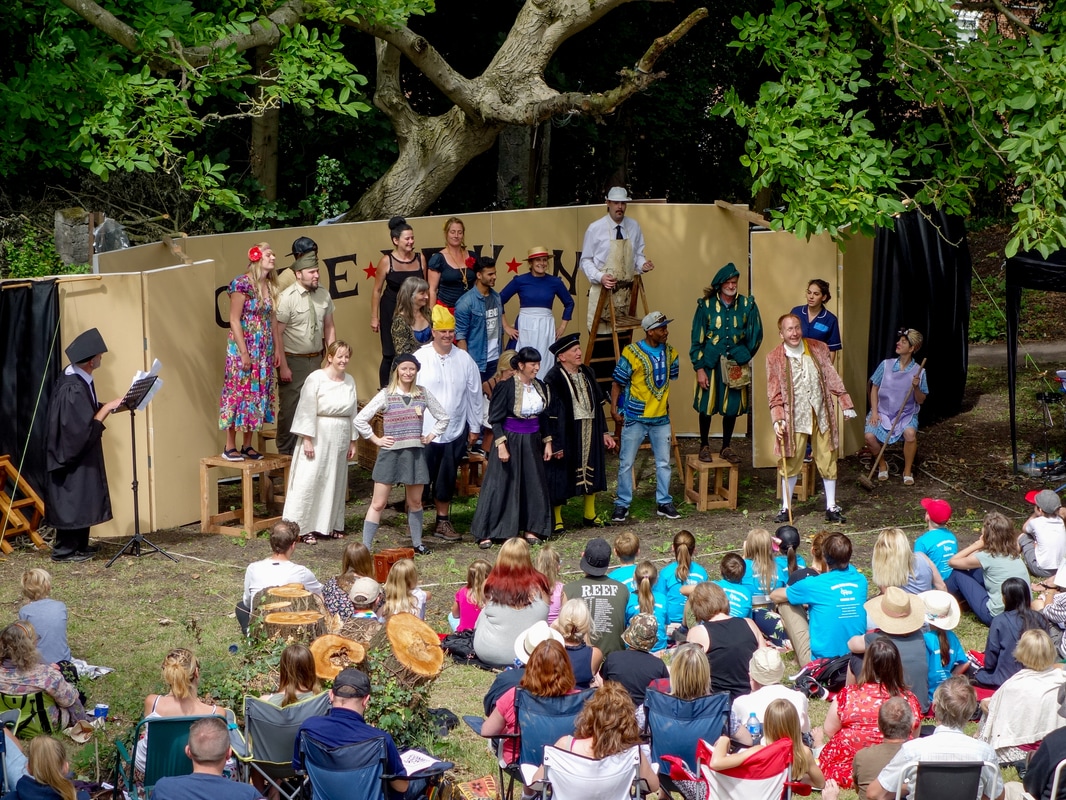 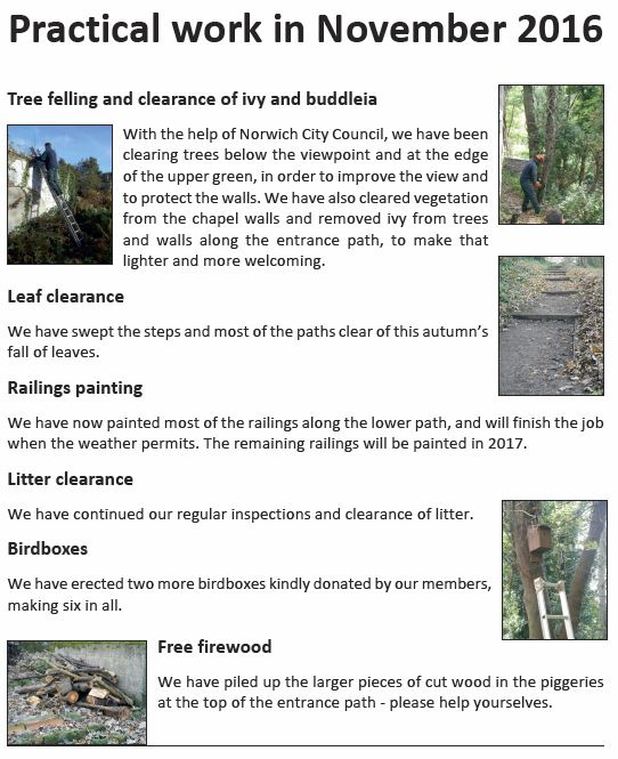 ​
Castle fireworks, 4th November
Around 100 people came up to Kett’s Heights to watch the annual firework display from Norwich Castle. It was great to see so many people up there, including lots of teenagers and families with young children. The view was even better thanks to the work of Will Stewart and the Practical Works Group who had removed more of the encroaching foliage from the viewpoint. The litter picker on duty the next day reported that there was very little litter, which is very heartening. Let’s hope this becomes a popular annual event.
​
October 2016
Mustard TV
Wednesday October 26th saw a unit from the local Mustard TV channel up on the Heights discussing the Kett's Heights project with John Trevelyan & Norman Lister. The result will be broadcast in the near future so watch this space to find out when!
See the photos on our gallery page.

New nesting boxes
Thanks to a very generous donation of 4 x RSPB nesting boxes we now have some extra shelter for over-wintering birds and a place to rear their young in the Spring.  Quite a challenge to install them going up a shaky ladder on a windy & rainy morning! See the installation work on our gallery page.
Railings!
Work on painting the lower path railings continues apace!
​September 2016
Magnificent success of Heritage Open Days, 8th – 11th September
The Friends of Kett’s Heights welcomed nearly 350 members of the public on our tours over Heritage Open Days, with people coming from all across Norfolk. We also had some people from Sheffield and Newcastle but we suspect they were visiting anyway!! We started and ended the tours at St Matthews Church, which provided a warm welcome and refreshments. Members of the Thorpe Hamlet History Group were also available to provide additional insights into the history of Thorpe Hamlet, and there were three PowerPoint presentations on Kett’s Heights, Thorpe Hamlet Then and Now, and Religion in Thorpe Hamlet. The event was hard work but more than fulfilled our aim to make Kett’s Heights better known and better used. See our Gallery for photos. http://www.kettsheights.co.uk/gallery.html
​
The Viewpoint sign installed
The new 'panorama' sign at the viewpoint was installed in early September and certainly enhances the site.  The sketch of the view (drawn by a KH member) was transferred to computer after which the descriptive wording &  QR barcode were added and then sent as a .jpg image to Admiralty signs for manufacture.  A member of the practical group carried out the installation.  See photos in the gallery page.

August 2016
​Friends’ noticeboard installed
A noticeboard to promote Friends activities and events has now been installed at the entrance to Kett’s Heights. It looks really smart and will hopefully attract people who have walked up and down Kett’s Hill for years and never known what Kett’s Heights was.

New entrance sign
A new permanent sign, designed by the Friends and provided by Norwich City Council, has been installed by the Friends next to the entrance gates. A Friends noticeboard is on order to be installed nearby.
June 2016
A rota has been set up to ensure that the site is monitored daily for litter and anti-social activity.  The railings at the main Viewpoint have now had a coat of primer paint applied in preparation for the final black topcoat.  See our gallery page for the pictures! Another free guided tour of the site took place on Sunday 5th June.
April/May 2016

The clearing of Kett's Heights viewpoint

The first major project took place on January 21st and involved The Friends who, working in partnership with Norwich City Council, spent the day vastly improving the vista from the main viewpoint.  Four sacks of cans and bottles and a sack of other rubbish were also collected and removed from the slope .
February saw the Friends & personnel from the Community Payback scheme clearing all the site's pathways, emptying & clearing the pond, stripping ivy from trees, pruning and generally tidying up.​

The vista from the viewpoint after clearance.